Imam Mahdi in the Quran

“And say, ‘Truth has come and falsehood has departed. Indeed, is falsehood, [by nature], ever bound to depart.”

Many authentic traditions refer to this point that the best example of the truth will happen at the end of the time when the Last Imam arises.

It is narrated from Imam al-Bāqir (the fifth Imam of Shia) to have said regarding the meaning of “And say, ‘Truth has come and falsehood has departed.

”, “Whenever the Upriser (Imam al-Mahdi) arises the authority of falsehood will be annihilated.”

1- When the truth comes there is no room for falsehood:

in full authority. Wherever there is a falsehood, the truth is not there and vice versa.

This means that when the last Imam comes since he will have a full authority over the world, falsehood will not be found anywhere.

Yes, it is not impossible for the truth and the falsehood to exist partially at the same time and to oppose each other, but the final victory of the truth will be achieved at the time of the advent of Imam Mahdi and the evil will be uprooted forever.

2. The promise of Allah will be fulfilled: Allah ordains the Proph

et to tell people that the truth will finally overcome the falsehood.

Allah’s promise will never fail. Many authentic traditions refer to this point that the best example of the truth will happen at the end of the time when the Last Imam arises.

It is also important to note that falsehood will have power if is practiced.

within a powerful and organized government. Therefore, if the corrupt governments lose their authority, all forms of falsehood that are dependent on them will become powerless and extinct. When the Imam comes and his government takes root on the earth, it is the time when the truth, instead of falsehood, will bewidespread and powerful.

3- Falsehood is doomed to depart: Allah clearly says that false

hood will never survive forever since “falsehood, [by nature], is ever bound to depart. It means that as long as the Imam has not come, those who are with the truth should not be disappointed even if falsehood appears to be dominant and mighty.

As a result, those who follow the truth should always try their best to move against the falsehood and hope to ease the path for the Imam to come sooner. 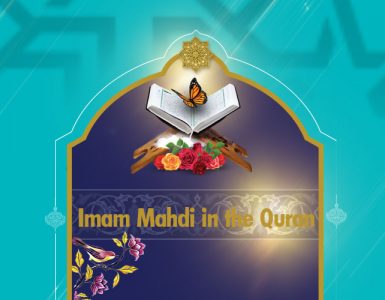 Imam Mahdi in the Quran